FORMaT is an adaptive, multi-arm, platform clinical trial designed to find out which combination of medications best treat Mycobacterium abscessus (MABS) chest infections. The treatment of MABS chest infections is complicated and the patient is required to take multiple medications which are often poorly tolerated. The combination of medications used to treat MABS chest infections are also very expensive. However, the evidence for what medication combinations should be used is not well understood. When to start these medications is also not well understood. As such, the FORMaT trial has been designed as an adaptive, multi-arm, platform clinical trial and brings together internationally recognized experts and clinical leaders to solve this treatment challenge.

What is an adaptive, multi-arm, platform clinical trial?

The FORMaT trial has been developed using an adaptive, platform clinical trial design. The trial platform provides a framework that can be used to continuously evaluate different treatment protocols. Initially, the design of the FORMaT trial will evaluate the standard medications prescribed to treat MABS lung disease as these standard medications have not been properly tested for treating this disease (Figure 1). The trial platform can also add new treatment arms into the trial as well as having the ability to remove any treatment arms deemed ineffective. The adaptive part of the trial allows the data to be analysed while the trial is ongoing and these results can be used to change the trial design in real-time. This means that we can quickly identify effective treatment arms and potentially allocate more people to the successful treatment arm/s. Overall, the FORMaT trial is designed to find effective treatment solutions to treat MABS lung disease.

1- Intervention Group: Require medications to get rid of their MABS lung disease.

2- Observation Group: Have not met the criteria to treat MABS lung disease infection or have chosen not to take the medications. 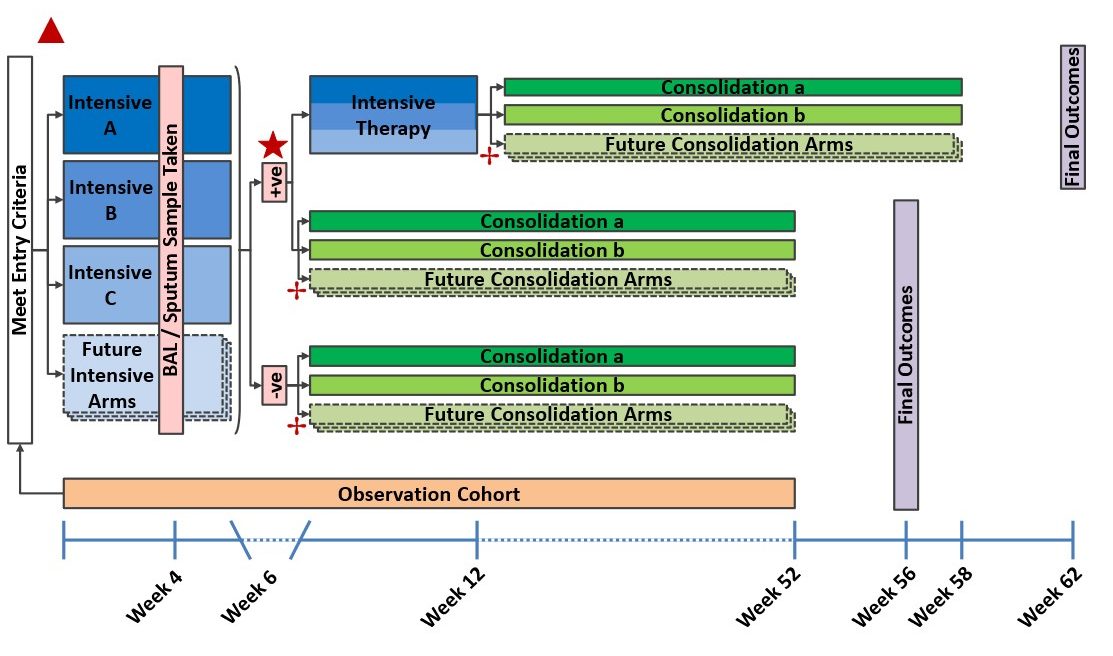 The FORMaT Trial has been registered with the Australian New Zealand Clinical Trials Registry (ANZCTR) and ClinicalTrials.gov:

Why are we doing the FORMaT trial?

Participating in the FORMaT trial

Why take part in this study?

If you have been recently diagnosed with a MABS chest infection you may be eligible to join the study. Speak to your treating doctor if you are interested in joining the trial.

Potential risks of being part of the study

Some people may experience adverse reactions to the medications provided. These risks will be discussed with you before you consent to being part of the study.

Who can participate in the FORMaT trial?

FORMaT trial sites are recruiting participants of all ages and gender who have had at least one positive MABS respiratory sample.

There are two groups of participants in the FORMaT trial:

What are nontuberculous mycobacterium?

Nontuberculous mycobacterium (NTM) are a group of bacteria naturally present in the environment, such as soil and water. These bacteria can cause significant lung damage in both healthy people and those with underlying lung disease.

There are more than 180 species of NTM. One of these is MABS of which there are three subspecies:

How is MABS infection treated?

Caring for the carer

Caring for a loved one with a serious illness like MABS lung disease can cause great disruption to your life, especially as you help your loved one with treatments and the challenges of a changed lifestyle. MABS lung disease is a chronic illness, and chronic illness can often cause a feeling of loss of control or feeling that the illness is a huge burden. These feelings are normal and should not be pushed aside. It helps for both you and the patient to know as much as possible about the illness and treatments, so you can make decisions together.

It’s important to address the emotional and physical issues you face, because each patient needs a strong support system, and as the caregiver, so do you, to be a strong support to the patient.

All research involving humans is reviewed by an independent body called an Ethics Committee or Institutional Review Board.

The ethical aspects of this research project involving the adult population have been approved by the HREC of The Prince Charles Hospital (HREC approval number: 53810).

The ethical aspects of this research project involving the paediatric population have been approved by the HREC of Children’s Health Queensland Hospital and Health Service (HREC approval number: HREC/19/QCHQ/58696).

This project will be carried out according to the National Statement on Ethical Conduct in Human Research (2007) This statement has been developed to protect the interests of people who agree to participate in human research studies.